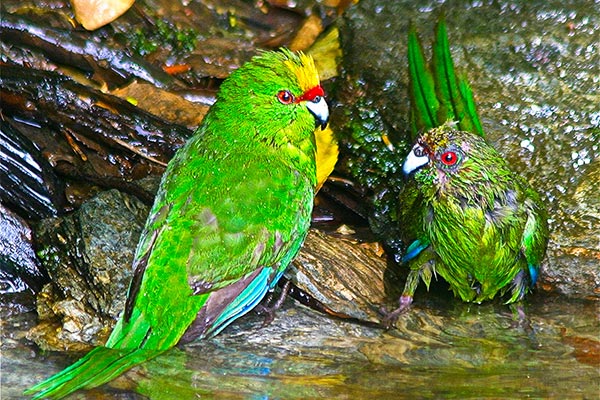 Yellow-crowned parakeets are small, bright green, noisy parrots that spend most of their time high in the forest canopy. They were once extremely common throughout New Zealand, but today are rare or uncommon in most places on the mainland, though they are still common on some predator-free islands and in a few valleys in eastern Fiordland and west Otago.

The yellow-crowned parakeet is a small, forest-dwelling, long-tailed, predominantly green parrot with a yellow crown, a narrow crimson band between the crown and the cere, a red spot on each side of the rump and a blue leading edge to the outer wing. The bill is pale bluish-grey with a black tip and cutting edge; the legs and feet black-brown.

Voice: a characteristic chatter made by both sexes when flying, and a variety of quieter and less distinctive calls.

Similar species: very similar in appearance to the orange-fronted parakeet, but the yellow-crowned parakeet is brighter green, has a crimson (not orange) band above the cere, and red (not orange) spots on the flanks. Also similar to the red-crowned parakeet which is larger and has a red crown, and a red patch behind the eye. 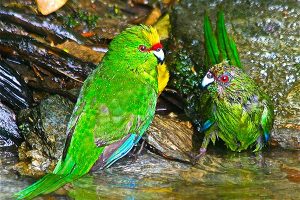 Yellow-crowned parakeets were previously found in forests throughout the main islands of New Zealand and on many offshore islands including the Auckland Islands. It is still present in most large native forests in the three main islands, though it is absent from Mt Egmont, north Taranaki and Northland. It occurs on Little Barrier, the Hen and Chickens, the Chetwodes Islands and Titi Island (outer Pelorus sound), Codfish Island, several smaller islands off Stewart Island and Fiordland and on the Auckland Islands. Yellow-crowned parakeets have been successfully introduced to Mana Island, and to Long Island and Motuara Island in Queen Charlotte Sound. On the mainland yellow-crowned parakeets are mostly confined to tall forests, but on islands they are also common in low scrub and even open grassland (Mana Island).

Yellow-crowned parakeets are common on the offshore islands and in some mainland forests. In Eastern Fiordland and west Otago they become very abundant for a short period every time the beech trees seed heavily. They are rare on the Auckland Islands. The total population is probably in the tens of thousands.

Yellow-crowned parakeets are preyed on by stoats, rats and possums, particularly while they are nesting and roosting in holes. During the rat and stoat plagues that occur in beech forests following beech mast, rates of predation can be very high and nesting success low. In many places they are conspicuously rare at low altitudes but more common higher up where rats and perhaps stoats are less common. Yellow-crowned parakeets are conspicuously more abundant on predator-free islands. They have been successfully translocated to three islands, and two mainland translocations are underway, to Maungatautari and Boundary Stream.

Yellow-crowned parakeets are mostly summer breeders, but when food is abundant they can breed throughout the year and raise multiple broods. They nest in holes in trees – mostly knot holes in large trees up to 32 m off the ground. The 2-9 eggs are laid on to rotten wood; the female alone incubates, but the male remains attentive, and feeds the female by regurgitation near the nest.

Yellow-crowned parakeets spend most of their time high in trees eating seeds, buds and invertebrates. They occasionally come down to the forest floor to eat seeds and to bathe. They are strong fliers and sometimes fly high above the canopy. When breeding, they associate in pairs but at other times they can form large flocks.

Because they mostly forage high in trees they are most often detected by their calls, particularly their chatter.