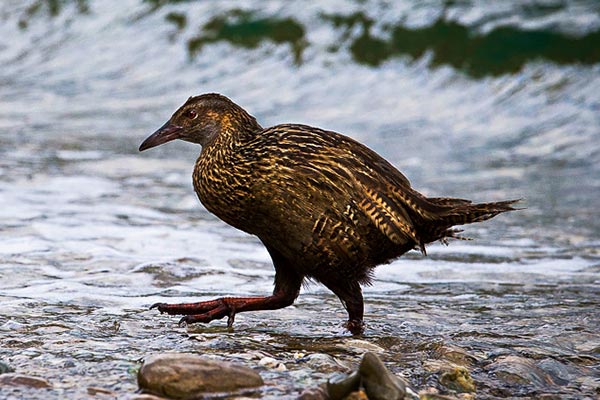 The weka is a large flightless rail that can have extremely variable plumage. Most birds are predominantly mid-brown, those on the Chatham Islands are tawny, those from Stewart Island are chestnut, and a proportion in Fiordland and on some islands near Stewart Island are almost black. Most birds have their dorsal feathers streaked with black, and all have their longest wing and tail feathers boldly barred with black. As adults, all have red eyes, a strong pointed bill and strong legs.

The weka is one of New Zealand’s iconic large flightless birds. Likely derived from a flighted ancestor, weka are 3-6 times larger than banded rails, which are considered their nearest flying relatives. Weka are charismatic birds that are often attracted to human activity. This makes an encounter with a weka a wildlife highlight for many people, as the curious bird searches for any food item that the intruder might bring. But people who live alongside weka often have a less charitable opinion, as they have to live with ever-watchful weka snatching opportunities to raid vegetable gardens, pilfer poultry food and eggs, and even steal dog food from the bowl. Unfortunately weka are not as robust as they appear, and have become extinct over large tracts of the mainland. Causes of extinction are complex, and are likely to be due to interactions between climatic conditions (especially drought) and predator numbers (especially ferrets, stoats and dogs). Fortunately, weka still thrive at many accessible sites, including on Kawau, Mokoia, Kapiti, Ulva and Chatham Islands, the Marlborough Sounds, North Westland, and parts of the Abel Tasman, Heaphy and Milford Tracks.

The weka is a large flightless rail that can have extremely variable plumage. Most birds are predominantly mid-brown, those on the Chatham Islands are tawny, those from Stewart Island are chestnut, and a proportion in Fiordland and on some islands near Stewart Island are almost black. Most birds have their dorsal feathers streaked with black, and all have their longest wing and tail feathers boldly barred with black. As adults, all have red eyes, a strong pointed bill and strong legs. North Island birds are predominantly grey-breasted with grey bills and brown legs. Western, Stewart Island and buff weka (the latter on Chatham Islands) can vary from having a grey to brown-grey breast with a wide brown breast-band, and having grey to pink bills and brown to pink legs.

Voice: spacing calls are generally given at dawn and in the half hour after sunset. They are a characteristic coo..eet given as a duet by members of a pair, with the male call lower and slower than the female. Other calls include booming, and soft clucking contact calls.

Similar species: the banded rail is much smaller and more boldly marked, including a rufous eye-stripe on an otherwise pale grey face, a broad orange breast band, and underparts boldly barred with black-and-white. Female common pheasants have smaller heads, shorter bills, much longer tails, and will fly if pressed. 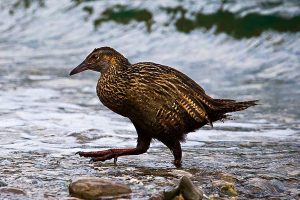 Weka occur in a wide variety of habitats, from the coastline to above the tree-line, including wetlands, rough pasture, shrubland, and native and plantation forests. They are often encountered at the margin of two habitats (e.g. the forest/pasture edge), and are reliant on areas of dense cover to retreat to.

Weka populations often experience sudden declines after years of population expansion. These have been cyclic in Golden Bay. Healthy mainland and island populations have at least 0.6 weka per ha, with overall densities ranging between 0.06 and 2.6 weka per ha.

The main recognised threats are starvation during droughts, and predation by mustelids, especially ferrets.  Weka are often killed by uncontrolled dogs, and are legally hunted on the Chatham Islands and on some muttonbird islands. Weka have been eradicated from many islands where they had been introduced to, due to their predatory impacts on other fauna, especially burrow-nesting seabirds, ground nesting birds, reptiles and large invertebrates.

Since 1863, there have been about 100 attempts to establish new weka populations for conservation reasons using translocations; only 14 of these were successful, nearly all of which were on small islands. The only natural North Island population that exists is that between Motu and Opotiki, near East Cape. All South Island mainland populations (apart from Totaranui, Golden Bay) and remaining island populations in the Marlborough Sounds are natural, while all remaining populations on Stewart Island, on most of the islands surrounding Stewart Island, and on the Chatham Islands are introductions.

The timing and number of clutches per annum varies between some pairs producing multiple clutches per annum, to intermittent breeding once every few years. Annually breeding occurs from late winter to early summer. The nest is a woven cup of fine grass or sedge leaves in dense vegetation, usually under an object or within a burrow with very little head space. Clutch size is typically 1-2 (or 3) eggs on islands and 2-4 eggs on the mainland. The female does most incubation between early morning and late afternoon and the male does the rest, and most of the parental care.

Weka are flightless, and often approach people closely. When foraging, they move leaf litter with their bills but not their feet. Pairs roost together at night in the same location and duet from that site. The oldest known bird was 14 years old on the South Island mainland and 19 years old on Kapiti Island. Weka have been known to return overland after translocation, or swim over 1 km, as they did to Maud Island after they were removed.

Weka are omnivorous, and are both scavengers and predators. They consume a wide variety of fruit and invertebrates, also eggs, lizards, small mammals and birds, and carrion. They have been recorded killing animals as large and tough as stoats (300 g), Norway rats (500 g), and Westland petrels (1200 g).