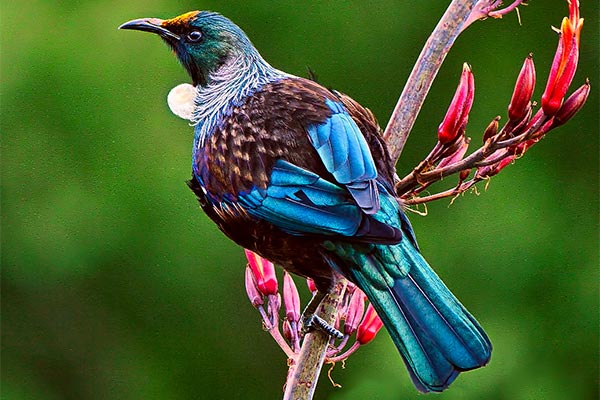 Tui are boisterous, medium-sized, common and widespread bird of forest and suburbia – unless you live in Canterbury. They look black from a distance, but in good light tui have a blue, green and bronze iridescent sheen, and distinctive white throat tufts (poi). They are usually very vocal, with a complicated mix of tuneful notes interspersed with coughs, grunts and wheezes. In flight, their bodies slant with the head higher than the tail, and their noisy whirring flight is interspersed with short glides.

Tui have almost-black heads, underparts, wings and tails that have an iridescent blue and green sheen, especially on the head and wings. The upper back and flanks are dark reddish brown with a bronze sheen, the nape and sides of the neck have filamentous white feathers, and there are two unusual curled white feather tufts on the throat (poi). Small white shoulder patches on the upperwing show prominently in flight, but are usually concealed when perched. The bill and feet are black, and the eye dark brown. The sexes are alike, but the male is larger. Adults have a notch on the 8th primary, and this feather quivers from the narrow part creating the whirring sound in flight. At first, juveniles have a browner body and lack the throat tuft, but after a few months they are only distinguishable in the hand from the lack of notch on the 8th primary.

Voice: a loud and complicated mix of tuneful notes interspersed with coughs, grunts and wheezes. In flight, tui maintain contact and harass raptors with a repetitive scream.

Similar species: male blackbirds are uniformly black, lack throat tufts, and have an orange bill. Bellbirds have very similar song, but this is more fluid, and lacks the loud coughs, grunts and wheezes of tui. 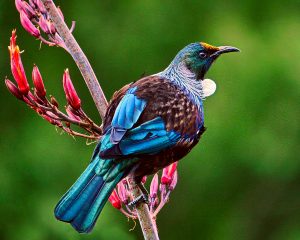 Tui are widespread and locally abundant on the North, South and Stewart Islands, and their offshore islands; they are scarce only in drier, largely open country east of the Southern Alps. Tui are present on the Kermadec and Auckland Islands, and there is a larger subspecies endemic to the Chatham Islands. Tui are absent on the Poor Knights Islands probably due to the very high density of bellbirds there competing for a limited nectar resource. Tui are found in native forest and scrub (sometimes in exotic forests), and in rural gardens, stands of flowering kowhai and gums, and in suburban parks and gardens. There is much local movement, when tui follow a seasonal succession of flowering or fruiting plants. They usually nest in native forest and scrub, but will commute more than 10 km daily to feed on rich sources of nectar.

Tui are locally abundant on the mainland and on some offshore islands, especially where there is a concentration of flowering plants or fruiting trees (e.g. flowering kowhai, fuchsia, flax, rata or gums; or fruiting kahikatea) and generally in higher numbers in areas where there has been pest (possum and predator) control. They are common on the Kermadec and Auckland Islands, but are scarce on the main Chatham Island (they are more common in the southern Chatham Islands).

Tui were the most common passerine found in Maori middens and were probably once an important source of protein. Despite the loss of the vast majority of lowland forest in New Zealand, tui have probably benefitted from the introduction to New Zealand of a variety of flowering and fruiting plants. These new species, as well as ‘out-of-range’ plantings of native species and sugar-water feeders in gardens, now provide tui with a reliable year-round supply of nectar and fruit. Tui respond extremely well to pest control programmes targeting possums, rats and mustelids, which are probably their main nest predators.

Recent attempts to reintroduce tui to Banks Peninsula, and Chatham Island tui to Chatham Island (from Rangatira Island), both in 2009-10, are showing encouraging signs of success.

Eggs are laid from September to January. The nest, built by the female, is a rough bulky structure of twigs and sticks, lined with fine grasses, high in the canopy or subcanopy. The clutch is 2-4 white or pale pink eggs, marked with reddish-brown spots and blotches. Incubation and brooding is by the female only. Chicks are initially fed only by the female, but later the male helps to feed them.

Tui are notoriously aggressive, and will defend a flowering or fruiting tree, or a small part of a large tree, from all-comers, whether another tui or another bird species. They vigorously chase other birds away from their feeding territory with loud whirring wings. Tui have a display flight, in which they fly upwards above the canopy, and then make a noisy, near-vertical, dive back into the canopy. Tui play a very important role in the dynamics of New Zealand forests because they are one of the most common pollinators of flowering plants, and also disperse the seeds of trees with medium-sized fruits.

Tui diet varies depending on the seasonal availability of nectar and fruits. Their preferred diet is nectar and honeydew, and they will often shift to, or commute daily or more frequently to, good nectar sources, such as stands of puriri, kowhai, fuchsia, rewarewa, flax, rata, pohutukawa, gums and banksias. In the breeding season, tui supplement their nectar diet with large invertebrates such as cicadas and stick insects obtained by hawking or by gleaning from the outside of trees. In the autumn, medium-sized fruit such as wineberry, kaikomako, mahoe, ngaio, rimu or kahikatea, make up much of the diet. In winter, flowering gums, banksias, puriri, and tree lucerne are important nectar sources, along with sugar-water feeders in gardens.