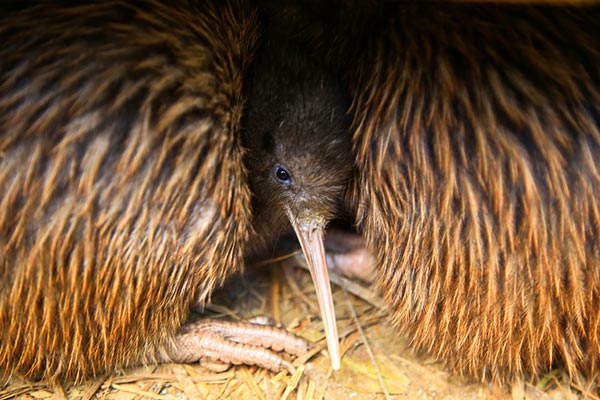 Similar species: tokoeka are larger and darker or redder. The calls of weka are similar to the male call, but weka have two-syllable calls, and usually have fewer repetitions. 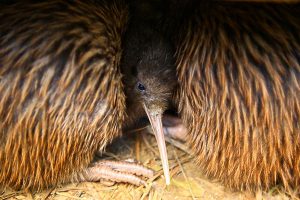 Rowi are locally common in native lowland forests in a small area of moraine debris inland from Okarito. They have recently been introduced to Mana, Motuara and Blumine Islands, in the Cook Strait region. Before human settlement of New Zealand rowi were widespread throughout the northern South Island and into the southern North Island, as far north as Lake Poukawa (Hawkes Bay).

There were about 375 rowi in 2012. The only breeding population is at Okarito; island populations are either used as crèches or have been established only recently.

Rowi disappeared from most of their range in the southern North Island and northern South Island. Since European settlement have been known only from the Okarito area, in roughly the same range as occupied now. Up until the 1990s, they were declining due to recruitment failure caused by predation of chicks and juveniles by stoats, and some adults being killed by dogs and motor vehicles. In 1995, their population was estimated at 160 birds. ‘Operation Nest Egg’ (the removal of eggs or young chicks from the wild and the rearing of chicks and juveniles in captivity and on Motuara Island, until large enough (1.2 kg) to cope with the presence of stoats), allowed the populations to increase to about 200 birds by 2000. A landscape-scale stoat trapping programme in South Okarito Forest from 2001 to 2005 largely failed to protect chicks from stoat predation. Operation Nest Egg was therefore reinstated, and the population has grown rapidly to the 375 birds in 2012. New populations have been established on Mana and Blumine Islands, but birds have yet to breed at these sites.

Rowi eggs are laid from July to January. The nest is in a burrow, hollow base of a tree, or in a hollow log. Clutch size is 1, but sometimes clutches can be overlapped with one freshly laid egg and one close to hatching.  The pale-green egg is very large. Incubation is shared by male and female, with the male doing most incubation by day and duties are shared through the night.

Rowi are flightless and nocturnal. During the day they rest in a burrow, hollow tree or log, or under thick vegetation and emerge shortly after nightfall. They feed by walking slowly along tapping the ground and when prey is detected they probe their bill into the leaf litter or a rotten log; occasionally plunge their bill deep into the ground. Rowi call occasionally each night to advertise territory and to maintain contact with partners; pairs often duet, with the partner responding a few seconds after the first call has been completed. They are territorial, and fight conspecifics with their sharp claws.