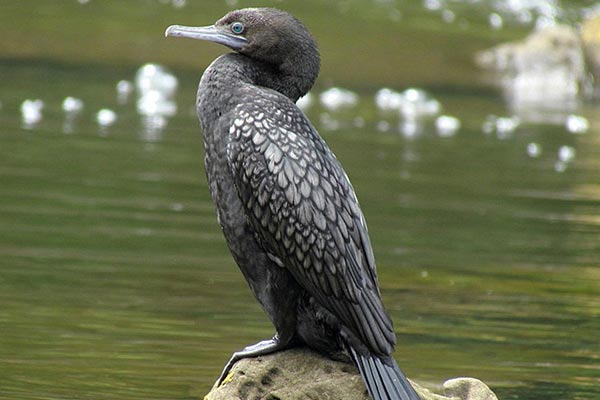 The little black shag is a sleek, black-plumaged shag with a glossy sheen on the back and a thin black to dark grey bill, black legs and black feet. Juveniles resemble adults, but have dark brown-black plumage. Little black shags are similar in size to little shags, but they lack any white plumage and have a relatively short tail. They are much smaller than black shags. Little black shags occur in harbours, lakes, estuaries and coastal inlets. They are gregarious when feeding and roosting, and are the only New Zealand shag species that routinely forages co-operatively in flocks. They fly strongly, close to the water and in a V formation, the wings sometimes almost touching. They occur mostly in the North Island and disperse in autumn to feed and roost in tight-knit flocks.

Little black shags have sleek, all-black plumage with a dark green glossy sheen on the upper wings apparent in good light. They have dark facial skin, a thin black to dark grey bill and black legs and feet. The iris is bright green, and there are bluish-green tubercles around the eye. Small nuptial plumes develop during courtship but these are lost during breeding.

Males and females are identical. Juveniles have dark brownish-black plumage, and chicks have yellowish bills. Little black shags are smaller than black shags and they are often seen in flocks of a few birds to about 100, occasionally more. They breed in colonies in trees overhanging water, and sometimes on the ground on small islands.

Voice: little black shags are quiet except when breeding, when males utter a variety of throaty croaks and whistles.

Similar species: many juvenile little shags are completely dark, but they differ from little black shags in having stubby yellow bills and relatively longer tails. Black shags are much larger, and usually have yellow facial skin; breeding adults have a white flank patch that is never present on little black shags. The little black shag has a much brighter green eye than either species, if seen at sufficiently close range. 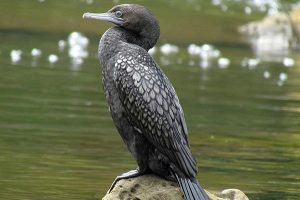 Little black shags are thought to be a relatively new species in New Zealand and their distribution is increasing. They mainly occur in the North Island, particularly in Northland, Rotorua, Taupo, Wairarapa and Wellington. They are increasingly being reported in the South Island.

Little black shags occur mostly on harbours and lakes, but also occur on braided rivers, and muddy edges of inland and coastal inlets, lakes and ponds, including sewerage ponds. Vagrant to Stewart Island (2011) and Snares Islands (2013).

Unknown but probably slowly increasing and may number several thousand.

Foraging adults are at risk from entanglement in unattended set nets, which potentially could ensnare an entire feeding flock. Predators may take some eggs and chicks, but this has not been studied.

Little black shags breed colonially between late October and December, sometimes nesting with other shag species. The nest is an open platform of sticks and twigs, lined with leaves and grass, in trees overhanging fresh water. The 2-5 (typically 4) pale bluish-green eggs are laid 2 days apart. It is thought that both sexes share nest building, incubation and protecting chicks. The incubation period is unknown. Young are naked at hatching. Juvenile plumage is dark brown with slight scalloping appearing with age.

Little black shags are highly gregarious species, especially after breeding although birds are also seen singly or in small groups. Conspicuous flocks of up to 100 birds (sometimes more) feed, roost and travel together at estuaries, lakes and rivers. They forage co-operatively, herding and encircling shoals of small fish. Birds feed throughout the day but rest at times on rocks, shingle, or river banks or mudflats. Roosting is in flocks in trees or on rocky outcrops on the shoreline.

At Lake Rotoiti, near Rotorua, little black shags use a diversion wall in the lake for nesting, roosting and as a sentinel position for fishing. Little black shags are strong fliers, usually just above the water surface and often in a V formation. Males display a variety of mate-attraction and territorial displays at or near the nest, including wing-waving, gargling, pointing, kink-throating and hopping.