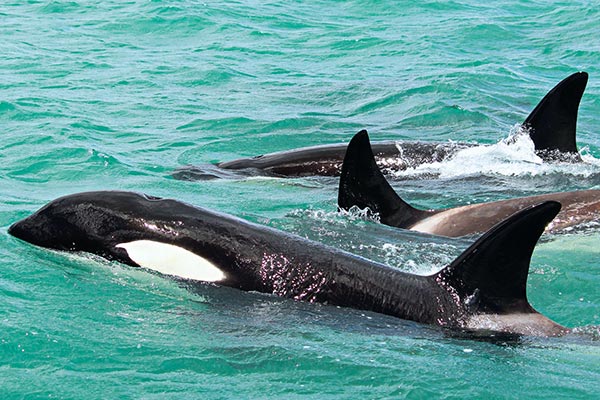 Where to find orca

Orca are the most widely distributed mammal on earth with the exception of humans. Its distribution is patchy however and it is more commonly seen at the poles and in cooler waters. They prefer deeper water but can be found in shallow bays and estuaries, and in inland seas. Orca can be found all throughout New Zealand’s coastline. They come to Picton to feed on Stingrays. We see them between 10-15 times a year. Best to go on our Wildlife and Dolphin Tour to find them:

Become a WCA Marine Guide for a rewarding career ; 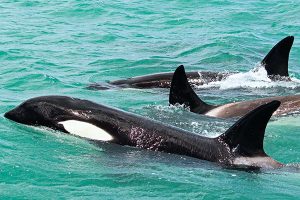 Orca in Picton and Wellington

Pods of orca are known to venture into Wellington Harbour throughout spring and summer looking for a unique food source (orcas in other parts of the world aren’t known to do this), but it is rare for them to stick around. They dig in the muddy sea bottom for stingrays and are often seen hearding them into the shallow water around Oriental Parade, Frank Kitts Park, and The Lagoon. Passers-by have even watched as one stingray made a frantic leap for safety onto nearby rocks, later to be assisted back into the water by a nearby observer. In Picton, they can come into the Marina looking for food.
They often train their young on how to hunt for stingray in Queen Charlotte Sound and the groups of up to 25 can be observed in calm sheltered waters socializing and matting in this location.

Queen Charlotte Sound is the best location in New Zealand for observing Killer Whales as the calm water give amazing viewing opportunities and E-ko small group Tours and knowledge of the area make this the place to go. With very little vessel traffic the animals relax and can be in the sound for up to 3 days.

New Zealand is home to an estimated 150–200 individuals, which travel long distances throughout the country’s coastal waters. We are beginning to understand that there are different types of orca throughout the world, and work on defining these types is currently underway. Even within New Zealand it has been proposed that there are three different types, based on observations of different food preferences. Orca are typically encountered in family groups or pods. Pods are usually formed for life and can result in the development of unique dialects.

These dolphins have an extremely diverse diet and are the only known cetaceans that regularly prey upon other marine mammals. Attacks or kills have been documented on more than 35 species, including blue whales. Fish species are also important in their diet, such as salmon, tuna, herring, cod, sharks and rays. Squid, octopus, sea birds and sea turtles are also eaten. Orca hunt cooperatively and are even known to intentionally strand themselves on beaches temporarily in order to catch seals.

Females give birth to their first calf between 11 and 16 years of age and tend to do so every five years for their 25-year reproductive life span. The gestation period is 15-18 months and calves are nursed for at least one year. Females are known to live up to 80 or 90 years. Males reach physical maturity at about 21 years and live for a maximum of 50-60 years.

Historically, orca were targeted by fishers for human consumption but no significant hunting occurs today. Nowadays, one of the greatest potential impacts is likely to be disturbance caused by vessel traffic. The presence of boats is known to disrupt the normal behaviour of these animals, particularly resting, and underwater noise may disrupt echolocation signals and other communication. As orca are at the top of the food web they are particularly susceptible to pollution via bioaccumulation (the accumulation of toxins through the food chain).