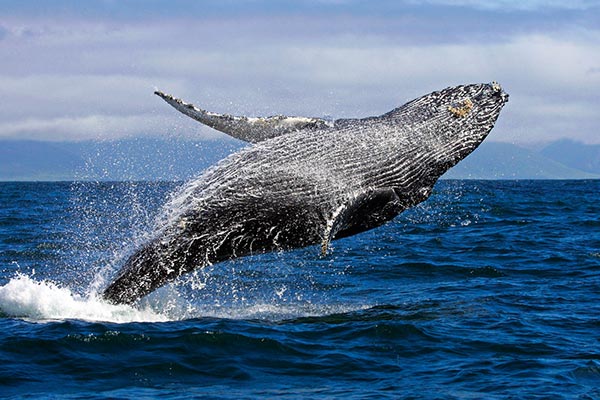 Humpback whales are easy to identify and are well known for their spectacular breaching and beautiful, complex songs.

They have a small dorsal fin with a distinctive hump at the front, knobbly protuberances on the head, tip of lower jaw and leading edge of extremely long flippers.

Their tail flukes are broad and have a unique black and white colour pattern, which allow individuals to be identified. They have a variable colour but are generally black with white on the underside and on the flippers. 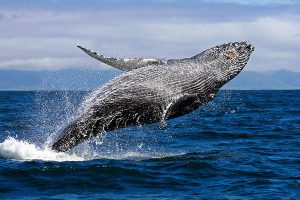 In the Southern hemisphere, commercial whaling in the 20th century brought humpbacks close to extinction. NZ ceased whaling in 1964, with the closure of the Perano whaling station in Tory channel. The stocks had diminished such that humpbacks were no longer migrating through Cook Strait and commercial whaling was no longer viable. Since then New Zealand has become a vocal advocate for whale protection and conservation.

In the Southern Hemisphere there are six humpback whale stocks, as defined by their Antarctic summer feeding areas. They are frequent visitors to the coastal waters of New Zealand when they undertake seasonal long distance migrations (approximately 10,000 km/yr) between summer feeding grounds in high latitudes (Antarctica) and winter calving and breeding grounds in tropical or near tropical waters. They travel mainly along the east-coast of the South Island and through Cook Strait during winter, and return along the west-coast during spring.

The Oceania population of humpback whales was classified in 2008 as ‘endangered’ by the International Union for Conservation of Nature (IUCN).

These whales are baleen feeders with a generalised diet, including krill and small schooling fish (e.g. mackerel and herring). They show the most diverse feeding techniques of all baleen whales including lunging through patches of prey, stunning prey with their flippers and forming “bubble-nets”.

Breeding and calving both occur in winter, as gestation lasts around 11 months. Nursing seems to continue until calves are one year old. Both females and males are sexually mature at around 5 years old and females typically give birth every two to three years.

Due to their coastal distribution, humpback whales were heavily exploited by the whaling industry, and it is estimated that over 90% of some populations were killed. Most populations now appear to be recovering. These whales are known to die from entanglement in fishing gear and collisions with ships. As these animals are only visitors to New Zealand, whale watching is opportunistic and is unlikely to affect their behaviour.