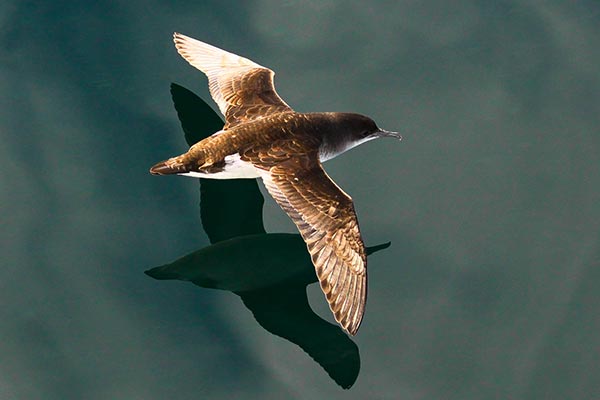 The fluttering shearwater is a small dark-brown-and-white shearwater. A dark cap extends below the eye in a smudgy line to a partial collar, giving the head a dusky appearance. The upper-surfaces are uniformly dark grey-brown, including neck, wings and tail. Distinctive white patches (‘saddle bags’) extend up from the white flanks, behind the wings to form white sides to the rump

The fluttering shearwater, with its distinctive, ‘flutter-glide’ flight, is a ubiquitous seabird of inshore waters in the top half of New Zealand, especially in the northern-eastern North Island and Marlborough Sounds-Cook Strait regions. It is often seen in flocks, sometimes numbering thousands of birds, moving rapidly while foraging. Fluttering shearwaters feeds in association with schools of fish (e.g. kahawai, trevally) or in massive groups at the surface on crustaceans; and at times, resting in large, dense rafts. During the post-breeding period, a considerable proportion of the population remain within local waters, where fluttering shearwaters are a common sight inshore throughout winter months. They have been observed visiting colonies during the non-breeding period. However, they are also trans-Tasman migrants and are recorded in considerable numbers in eastern and south-eastern Australian waters from February to August. These birds may all be pre-breeders, and have included band recoveries of recently-fledged chicks.

The fluttering shearwater is a small dark-brown-and-white shearwater. A dark cap extends below the eye in a smudgy line to a partial collar, giving the head a dusky appearance. The upper-surfaces are uniformly dark grey-brown, including neck, wings and tail. Distinctive white patches (‘saddle bags’) extend up from the white flanks, behind the wings to form white sides to the rump. White extends from the chin to the under-tail, apart from a dark thigh patch. The under-wings have a dusky appearance with variable dark markings on the inner-wing, although in strong low light can appear white. The appearance can vary markedly with light conditions. The bill is long, thin, and dark; the legs and feet are pinkish-brown with dark webs. The feet extend beyond the tail in flight. They moult from late January, appearing ragged, with the dark upper surfaces faded to mid-brown. Their flight is best described as ‘determined’, i.e. low and fast, with bursts of rapid wing-beating (fluttering) interspersed with short glides.

Voice: a distinctive, staccato ka-hek-ka-hek-ka-hek, mostly made in flight, over and around colonies, however very occasionally heard calling at sea amongst feeding flocks. 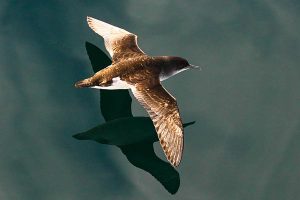 Fluttering shearwaters are abundant. A 1980s estimate was between 100,000 and 1 million birds; numbers are likely to be closer to the lower end of that range. Flocks of up to 20,000 birds have been recorded.

All fluttering shearwaters breeding colonies are on mammal-free islands, or islands where only Pacific rat (kiore) is present. Reinvasion of islands by mammalian predators is a major threat. Their relatively shallow nesting burrows are often in friable soils, and are easily collapsed by people moving through areas where they breed; access should be strictly limited. Fluttering shearwaters are not generally attracted to fishing vessels. However, because they feed by diving, commonly in flocks, they can be caught in set nets, at times in large numbers (e.g. 166+ in a single incident at Whangaparaoa Peninsula, in May 2009). Over-harvesting of schooling fish (e.g. kahawai, trevally, mackerel), principally through purse-seine fishing, could have a serious impact on fluttering shearwaters and other species that feed in association with these schools. Oil spills are also a risk; at least 240 fluttering shearwaters were killed by oil following the stranding of the container ship Rena in the Bay of Plenty in October 2011.

Fluttering shearwaters nest in short burrows, under scrub or in forest; colonies can be extremely dense where populations are large; in places co-exist with other species (e.g. common diving petrel, grey-faced petrel). The single large (57 x 40 mm) white egg is laid from late September through to late October. Incubation and chick-care is shared, but there are no data on incubation length or nestling period. Chicks fledge in January (northern New Zealand) to February (Cook Strait)

The fluttering shearwater is a surprisingly poorly-known species. They return to breed when 4-10 years old, and are usually faithful to mates and breeding burrows between years. Results of recent research using geolocators to investigate seasonal movements of birds breeding on the Mokohinau Islands has yet to be published.

Fluttering shearwaters eat small fish (e.g. pilchards, sprats) and crustacea (e.g. the small euphausiid Nyctiphanes australis). Fish are caught by pursuit diving, using partially-folded wings for propulsion. Pelagic crustaceans are caught while moving forward, head often submerged to look underwater, sometimes with wings raised, and partially spread. Foraging fluttering shearwaters are a spectacular sight when feeding in fast-moving flocks in pursuit of fish schools. There is frenetic activity, with many birds splashing into the water and disappearing below the surface to emerge and repeat the action.