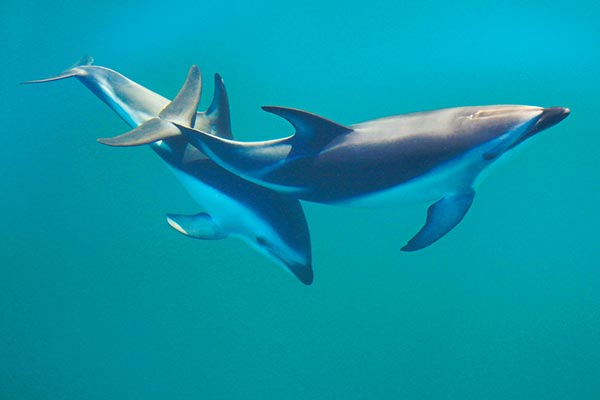 In New Zealand, dusky dolphins appear south of East Cape and are rare in more northern waters. Dusky dolphins have virtually no beak, and their dorsal fin is not hooked and rather blunt. They are a bluish-black colour on the back and tail and white on the underside of the body. A female dusky dolphin grows to a maximum length of 1.93 m, while the males are slightly larger with a maximum length of 2.11 m. A newborn is usually around 0.92 m.

Dusky dolphins (Lagenorhynchus obscurus) are confined to the southern hemisphere in temperate and subantarctic waters between around 26°S and 55°N. Main populations occur around South America, off south western Africa and in New Zealand waters. In New Zealand, dusky dolphins appear south of East Cape and are rare in more Northern waters. They have been recorded as far south as Campbell Island and east out to the Chatham Islands, with main populations occurring in Kaikoura and Admiralty Bay in the Marlborough Sounds. Large groups of several hundred to over 1000 dusky dolphins are present in Kaikoura all year round with individuals moving north to feed at Admiralty in winter months. Duskys are a highly coastal species and generally prefer waters less than 2000 m deep. 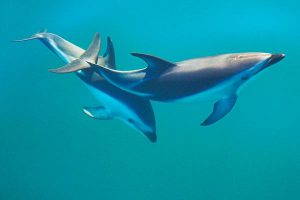 Due to their coastal nature, populations of dusky dolphins around the world are discontinuous and reproductively isolated. Large-scale migrations are known to occur in New Zealand however, and inshore-offshore movements are made both diurnally and seasonally with dolphins moving further offshore in winter. Overall, group sizes range from two to over one-thousand. There are thought to be between 12,000 and 20,000 individuals in New Zealand (Markowitz, 2004).